The macaron de Nancy was first created at the Monastery Les Dames du Saint-Sacrement in Nancy, a Benedictine order founded by Catherine de Vaudément, Abbess de Remiremont and daughter of Charles III, Duke de Lorraine. Charles III could not eat meat, but loved sweets and chocolate. Nuns cooking in the monastery are believed to have created this simple wafer which became known as the macaron de Nancy.

In 1792, following the French Revolution when religious congregations were forbidden, two sisters or Soeurs, Marguerite Gaillot and Marie-Elisabeth Morlot, went to live with the local doctor at 10, rue de la Hache in Nancy. There they began to bake and market these macarons, and soon became known in the community as Les Soeurs Macarons. In 1952 the city renamed the street where they first baked and sold their macarons “Rue des Soeurs Macarons”. The macaron de Nancy recipe is a secret, but this one comes as close as possible to the light, dry on the outside, slightly soft on the inside macaron of Nancy fame. 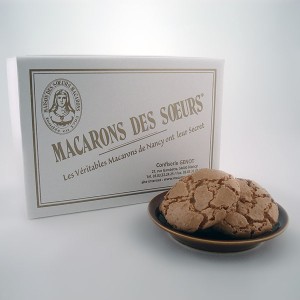 Preheat oven 350º F. In a bowl, mix powdered almonds, 14 oz. sugar and the egg whites. On the stove in a sauce pan, mix the remaining 4 oz. sugar and about 2-3 tablespoons water over medium heat. Boil sugar-water mixture to hard crack stage (but not caramel) and pour it over the ingredients in the bowl and mix well. Place dollops of the mixture on a baking sheet covered with baking parchment. Place in the oven for 3-4 minutes until the exterior is a light golden brown. Cool.

A dozen recipes were committed to paper in a young girl’s hand at the back of Belle Skinner’s French grammar notebook. They are believed to be her sister Katharine’s—either family recipe favorites or rules learned at the Holyoke Cooking Club where Katharine was a member. The 1880s photo of the Holyoke Girls’ Cooking Club shows Katharine Skinner, second row, second from left. Katharine is remembered as having more aptitude for cooking than her older sister, Belle.

In 1902, it was Katharine’s idea to organize the Skinner Coffee House, a settlement house with a state of the art kitchen, capable of serving more than 150 women mill workers in its adjacent dining rooms. In instituting the The Skinner Coffee House, Belle and Katharine continued their father’s philanthropic spirit, honored and celebrated his dedication to improvement in the lives of women and opportunities for their education and advancement. The Skinner Coffee House became a model women’s center and a thriving hub of community activity.

Then stir butter, sugar and eggs together beating them  hard, then add flour in which cream of tartar is mixed, and milk by degrees, dissolve the soda in the least drop of boiling water. Just the same for jellie cake Any kind of thing can be put between this cake.

Connecticut River Shad Shad, though not as plentiful as in previous centuries, are still fished every spring during the migratory run from late April to early June. Constance M. Green’s seminal work on Holyoke history describes the importance of fishing the Connecticut River and the  seasonal cycles of food harvests that sustained life in early New England. “Only the spring salmon and shad fisheries at the river varied the agricultural scheme of life in Ireland Parish (Holyoke) until well into the nineteenth century. In the latter part of the eighteenth century people came from many mills in April and May to fish at the falls where the most abundant supply could be netted. As many as 1,500 horses at one time were said to have been drawn up on the river banks a day or two after the fish had begun to run. The inn on the South Hadley side of the river was filled with fishermen; and farm houses on the east and west shore alike accommodated the thrifty householders who came to secure their supply of salmon or shad to salt down.”[i] Irish immigrants were among the first wave to find employment in Holyoke’s industrial mills. Springs evenings found many mill workers on the banks of the Connecticut River near the Irish settlement, known as “The Flats,” fishing for shad or salmon for the family dinner table. “Roe shad,” the migrating females, were prized for the fat  roe they carried, a spring delicacy. Most people would fry the roe in bacon fat, but this 19th century recipe uses the roe as the primary ingredient for croquettes that garnish the roasted shad filet. Shad in the Irish Style  and  Shad Roe Croquettes Ingredients.— 4 filets of shad Almond or olive oil to coat Salt Potatoes, cut with a ball scoop Method.— Split a medium sized shad through the entire length of the back; take out the spinal bone, then season the fish with salt; coat it over with sweet oil and broil it to a fine color, having it at the same time well cooked, then dress it on a hot dish. Garnish around with potato balls five-eighths of an inch in diameter, cooked in salted water, well drained, and covered with a green ravigote sauce, sending a sauce-boat of the same to the table. Around the potatoes lay croquettes made of shad roe, round and flat, and serve very hot.   Ravigote Sauce.— Green Ravigote.— Blanch a small bouquet each of parsley, chervil, tarragon, and chives in salted water, then drain and refresh them in cold water; drain once more, and press out all the water. Pound these herbs well in a mortar, and knead with four ounces of butter, add 2 tablespoons pureed blanched spinach then rub the whole through a sieve, stir well this butter into a pint of veloute, add to it a spoonful of good vinegar some pepper and nutmeg; pass this sauce through a fine sieve. Serve with boiled potato and shad.

Shad’s Roe Croquettes.— Ingredients.— 1 whole shad roe, soaked overnight in salt water Mushroom broth 2 TBS butter 1 TBS shallot About ¼ – ½ c. thick béchamel sauce Pinch of cayenne Bread crumbs 3 eggs Half butter and half oil for sautéing croquettes Method.— Boil shad roe in a little mushroom broth, then skin it. Fry in melted butter a little chopped shallot, add to it the roe. Some bechamel cream, salt and roasted red pepper purée reduce and stir in a piece of fresh butter; when this preparation is cold make it into one and a quarter inch croquette balls, flattening them down to half an inch in thickness; dip them in beaten eggs, then in bread-crumbs and fry to a fine golden color, then drain, wipe and dress around the potatoes.